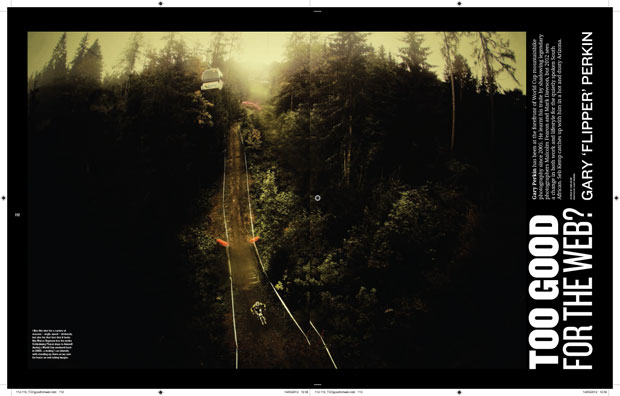 I grew up with Dirt Magazine from issue one and it pretty much formed who I am. I moved from XC racing to DH and hucking because of the messages I read in Dirt. I stopped “training” and pounding creatine shakes and instead started wearing full-face and baggys when I saw the fun and excitement of the DH/moto/BMX mix that Dirt was celebrating in the nineties. In school I had big fat silver hoop and ball body piercings in various parts of my body because of the images I saw of Palmer and Tattoo Lou in Dirt Mag. I now have both arms tattooed because of the photos I saw. I live in BC now because it is the centre of the universe for anyone who loves riding bikes hard but still lives their life kicking back.

There is absolutely no way I would be who I was, experienced the life I have, or live the way I do now if it wasn’t for Dirt Magazine.

You could also say that because of Dirt I was a retarded youth who followed fads, wore women’s jewelry, indelibly marked himself as a moron and has chosen the juvenile dirtbag life over any chance of having a nice house and retiring comfortably. But I’m happy in life and rich in bikes so Dirt has a lot to do with the satisfaction and relative wealth I now enjoy.

Which is why when I wrote for Dirt I felt the weight of responsibility being a part of such an important institution. And why, now that I am back scribbling words and dribbling thoughts onto the page for Dirt, I am extremely proud and honoured.

The first magazine I wrote for was Dirt Magazine and I still remember clearly the day I received the email from Mike Rose (Dirt editor) saying that not only would my words appear in the magazine but that he was offering me a monthly column. To say I was over the moon would be an understatement.

For four years I penned the ‘Whistler Diaries’ column but last summer I took a break from writing it. I enjoyed doing it immensely even though every few months I would consider throwing in the towel as the deadline approached and I would scramble to write something. But every month something would come to me and it would almost without exception be the most enjoyable thing to write. I took a break from Dirt for the last ten months not because I did run out of ideas but that I had too many. It was at a time when I was trying to make the leap of faith to writing full-time and to do so I knew some things had to change. One of the more bonkers things I did to make that change was to leave Dirt Magazine.

In issue #124 I have returned with a monthly column and a feature on photojournalist legend Gary Perkin.

Earlier this spring I had the opportunity to spend some time with Gary Perkin in Sedona, AZ and Santa Cruz, CA. It marked Gary’s official “move” to film making. I was terribly interested in his motivations for changing things up so sat down to interview him over the course of several formal interview sessions and numerous casual chats. The result is a story we titled ‘Too Good For The Web?’. I say we because it is a poignant line Gary said that sums up the changing form of the mountain bike media (all media too), his thoughts on it, and how he approaches his work. 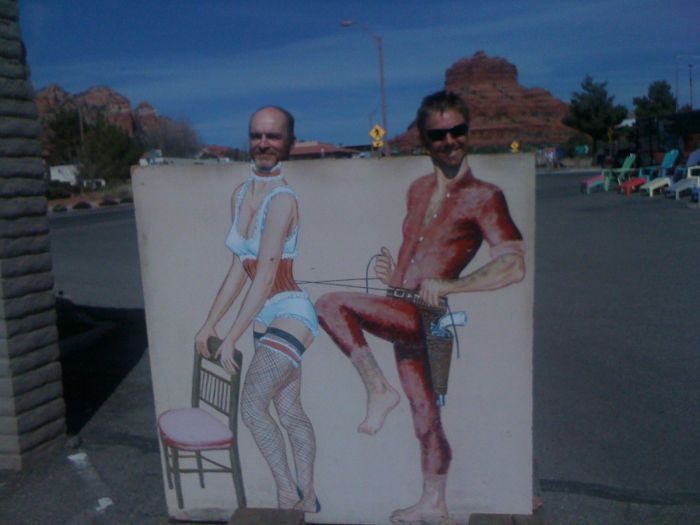 Gary is a gentle and calm chap, obviously so at home in his work he doesn’t fret one bit, but this is just one part of his character. I enjoy his company immensely and loved hearing his tales of lives past. Mountain biking dominates the life we see of everyone in the “industry” but it doesn’t stop there for most. Did you know Gary used to be travel the world working on yacht racing teams? Did you know he used to work in a high power marketing position in London? Did you know he traveled around South Africa with Ladysmith Black Mambazo? These are the interesting stories, some of which are in the Dirt feature but most of them wouldn’t fit in the page count. Anyway, what I took away from this is always look beyond what you think you know for everyone has colour and depth if you are willing to look.

The column is now called ‘Hey You Hate This’ because after the first year or so I rarely wrote about Whistler in ‘Whistler Diaries’, and instead used it as a soapbox to blabber on about something that was driving me mad or that I thought would stir some people up. People have said that from reading ‘Whistler Diaries’ that they imagined me to be an angry man, but I really am not. I see the role of a columnist to incite emotion, initiate thought, and generally entertain. Lots of columnists treat their 900 words as an excuse to write about their own life – sort of like a blog turned into print and forced into peoples hands. I think that is a waste of space, not only page space, but space inside a reader’s brain. The columnist should raise issues and give perspectives that shake up reader’s consciousness, awaken ideas that may have laid dormant, and perhaps instigate action.

Or it should just wind them up or make them chuckle.

For four years doing ‘Whistler Diaries’ I said plenty of wild things that I didn’t necessarily believe in. I wrote things just to be the devil’s advocate or just to straight up annoy the heck out of some sections of the readership. But only in the hope it sparked something in them or entertained other readers who could see the joke.

Anyway, #124 also marks a new look for Dirt Magazine. There is a new size, format and paper quality, all things aimed at improving the magazine and not just satisfying the corporate overlords. Here is what editor Mike Rose says about the new look.

“OK, so you should have noticed straight away that there have been a few changes with the mag. The most obvious being the size and format, we’ve gone a bit shorter. Why? Well…err…we fancied a change…and we wanted to improve the quality of the paper that we print on. Over the last few years paper prices have rocketed, so much so that we have had to drop the grade of the paper we have been using…and that’s not right. The feel and the quality of the magazine is massively important, and the old stuff just wasn’t ‘doing it’ for us. So a smaller size and a bit of juggling has meant that we can now use better paper. And, coincidently, the new format is better suited to our iPad version of the magazine. We’ve been amazed by the numbers of iPad subscribers we have. Is it the future? We’ll have to see about that.

“We’ve also made a few changes with the content of Dirt. With the ever–present onslaught of the internet, and all the good things it can offer, we have decided to switch things around a little. The magazine will become more feature based, articles will be able to have a bit more space to breathe (there’s still nothing like a big photo printed in a magazine is there?). We will still have bike tests and our Hammered section (now renamed ‘Wear and Tear’), but most of our product stuff (what was once called Fresh Produce) will be online. We can use more photos, embed videos, use graphics and have more space to write about products online. We can give you more information, and we can do this as soon as the products come through the door rather than a month down the line. And of course you can have your say (immediately) in our comments box at the bottom of each article. We have a lot of plans for our online content, and we really believe that the magazine and website can work hand in hand.

“This may sound a bit corporate, but how people consume information these days is changing rapidly. We have to constantly look at what we do and how we can react to these changes. We have to ask ourselves some tough questions…I mean, will magazines still be around in five or ten years? We have to be flexible. We are lucky here at Dirt that we can react quickly to stuff as it happens, so we are in a strong position. They do say that a change is as good as a rest.

“But enough of this, we also have to remember that the reason we all do this is because of our love for bikes and riding. Without those two wheels Dirt would be nothing. Enjoy the mag.”

Dirt means so much to so many people so anything they do to keep the magazine rolling and the inspiration happening is a good move. Here’s to Dirt Magazine. Thank you for having me back. I missed you so much.