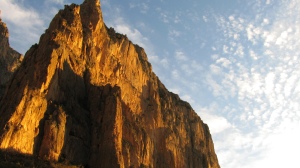 So I’m still in Mexico. 16 days to go. Since the half way period time has flown and now I’m faced with my imminent release back into the wild. Like a captive tiger that gets released into it’s ‘native’ environment I’m somewhat tentative of the affects that my incarceration will have upon me. It’s the little things. For instance in the past three months I’ve not had the use for pockets. No cell phone, no wallet, no coin change, no chewing gum, no shopping list. Just two empty fabric sheathes to put my hands into when the desert chill licks fiercely or when I find myself day dreaming, hands in pockets, kicking dust balls like I’m trying to kick bustling thoughts into order.

I’m certain nothing has changed and there is nothing to fear or consider more so than before. Coffee will come in the same sizes, the fashions will be just a pastiche of forms gone before it, and a smile will still get you get you a long way. It’s only been three months. I haven’t been home to Britain in four years and I’m pretty sure not much has changed. Beer will still be a currency of civility and barbarity in equal measure, moans and groans of discontent will be heard over applause and gratitude, and The Sun will still have a Page 3. We are living in Hypermodernity supposedly but I still think I will be able to find my bearings and (mis)translate the value and meaning of everything. 3 months is nothing.

I doubt anything has changed and I cast this thought into the thinking pot without concern that I will be reintegrate myself comfortably and without fluff and faff. But I hope I’ve changed enough to feels three months larger. Fed with three short but fattening months of peace, hard labour and furious consideration.

But back to that tiger. That tiger must have concerns, fears and apprehension, but beyond that maybe there’s is a primeval excitement of being returned. I’m like the tigers thrill, but I know what I’m heading to. I have ten days in California ahead. Old friends, newer friends, acquaintances, projects, content, ticks on the bucket list, and fun times ahead. A trip I’ve not planned but hoped for much longer than I think of. Top down, wanton waste, inconsiderately consuming more than my fair share. Sun beams reflected in sunglass tint, sea breezes fighting the wind of the livings hurricane, and a blue white canopy shielding a blue grey and neon savanna.

The above was actually part of an email I wrote to a friend. As I began writing to them I started finding myself putting certain things down on ‘paper’ that I have been struggling to do so previously. If that person reads this I hope they don’t become offended that I shared parts of the email. They were my muse in that ten minutes of procrastination. Thank you. You know who you are.

One thought on “MEXICO STILL BUT ONLY JUST…”