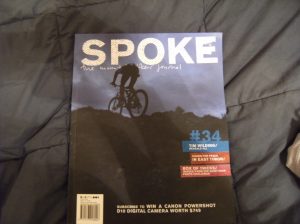 So the pigeon post arrived and brought a copy of Spoke Magazine 34 in which I have a several page article I wrote about the Saint Deep Summer Photo Challenge. Amazing pictures by Mattias Fredriksson and Dan Barham. 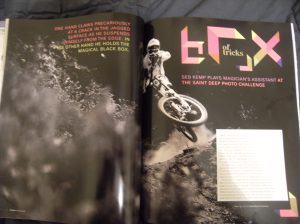 Spoke Magazine is one of my favourite magazines of all time. Beautiful print quality, superb layout, awesome photos, and a varied content. Eleanor Meecham is the editor there and runs a wicked tight ship. Caleb Smith is the man behind it all. He started it all and now is THE man for all affairs NZ riding. If you need anything sorting then he is the go to guy.

Here is the words from the article but they are mediocre at best, especially without the “Epic” photos and delicious layout. Go buy the mag…

“Ready!” he shouts as he hangs off the rock slab. One-hand claws precariously at a crack in the jagged surface as he suspends himself from the edge. In his other hand he holds the magical black box. His index finger twitches above the shutter button, poised for action like a gunslinger in a pistol fight. One eye is pressed to the viewer and the other is tightly closed. He can’t see them yet but he listens hard for the telltale clatter and thump of the approaching bikes. As they flash into view his finger bangs into action. The shutter sounds off a rapid succession of noises. Shhuct shhuct shhuct.

The riders carry on down the trail and dust billows up. He opens both eyes and trains them intensely on the small screen on the back of the box. He waits for the image to appear, nervous excitement gripping him. Is this the one? The pixels come into focus and the picture jumps out at him. “Nice!”

For conjuror of images Mattias Fredriksson, this was just one brief moment of contentment amongst many others at the Saint Deep Summer Photo Challenge. This Swedish super-shooter was one of six photographers invited to take part in this rather different event during Crankworx. Entrants had three days to shoot photos around Whistler, B.C. and one day to produce a slide show of the results. The winner would receive $3,000. That’s it. The rules were simple and the parameters loose. With no set assignment or list of required shots, photographers had to come up with their own theme and a personal interpretation of riding in Whistler––a sublimely difficult task.

This type of competition is pretty rare in mountain biking. Usually the riders, products or locations in the photos get all the glory, but finally there’s an arena for photographers to showcase their skills and step forward from behind the camera to take the praise. “This really is a chance for mountain bike photographers to stamp their mark as master-craftsmen,” said Paul Morrison, one of the competition’s judges and a legendary photographer in his own right. “I can see that in years to come photographers will really battle just to get on the invite list because it will mean their chance to join the Hall of Fame, so to speak.”

Photographers are usually the hidden talent of mountain biking, but this competition thrust them into the limelight and under the scrutiny of the judges, the public and even each other. Dan Barham, a master of the frozen image and a dedicated professional, was a little daunted by this at first. “As soon as I walked into the initial meeting I knew it was going to be a tough time; some of the greatest talent in the bike photo industry were all sitting around the same table, getting ready to face off in that friendly-yet-competitive style that’s normally reserved for riders. The only thing that kept me from freaking out right there, right then, was the knowledge that everyone else was feeling the same.”

Like the other five entrants Dan had a lot to contend with during the production process: assembling a team, finding good spots to shoot from, dealing with changing light and weather conditions, equipment faults, lack of sleep and sticking to the deadline. Each photographer encountered their own gremlins along the way. However, despite all the difficulties Dan was quick to point out that the rewards made it all worthwhile. “My favourite part was definitely being able to witness first-hand people’s reactions to my images. Normally I have no idea whether people are stoked on them or not, but a room full of people cheering is certainly a good indicator. Being able to compare directly a weekend’s work with your peers in the industry is an intimidating experience but ultimately rewarding.”

At the end of the night the judges gave Mattias the win and the biggest cheque. After helping out at this year’s competition––as Mattias’s right hand man and human tripod (a title I have been fighting to receive for years)––I can’t wait for next year’s event. The bar has been set high and he will be back next year with even more tricks up his wizards sleeve. He will need to come back with more tricks because I’m pretty confident there will be an even hungrier and larger mob of photographers hoping to take the top prize and the glory.
Seb Kemp