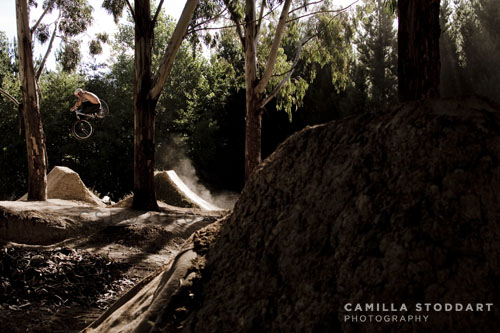 This post might seem a little self-indulgent but it is meant to highlight how a bike can take you to so many different places and can be ridden anywhere…as well as be a massive self-love reach-around to completion.

These are some of my personal favorite shots of all time. They might not be the ones that got printed anywhere but to me they are the best. It might be the memories attached to them or they capture the milli-second when I perhaps look rad and stylish on a bike. We are all critics and what what person likes another will detest. So let’s call these my Marmite shots.

Camilla Stoddart. Henry’s Yard, NZ 2010. Henry’s jumps were pristine this weekend and felt so rad doing hip-whip-tucks. If I could turn the photo around 180 degree you would be able to see the ocean through the gum trees. Henry lives in paradise.

Todd Hellinga. Silverstar Bike Park, BC. Airprentice weekend 2010. 5am or something like this. I was helping Todd help the Airprentice entrants shoot some shots and I think I got the best one. The kids weren’t into this corner, which was a freshly dug bowled out corner that hooked and fired up out of it. I wish I could pocket this one and ride it forever.

Jordan Manley. Whistler, BC. 2010 Santa Cruz V-10 launch. Love the lighting on this one.

Jerry Willows. Silverstar Bike Park, BC. Airprentice weekend 2010. I don’t know why but this feels like my best Greg Minnaar impression. His left whips are rad and this is my ode to them.

Dan Barham. Brevard, NC. Shooting for the 2012 Bike Mag: Bible Of Bike Tests. I had a couple cracks at this before Dan moved us on to another spot in search for a cover worthy shot. I love this because the imaginary gap of was hucking was quite long over a long root section and the landing was to flat on bedrock. The rear wheel on this “XC” worthy bike wasn’t quite so straight after a few goes and if I had clipped by bars on the tree on the right (it was much tighter than it looks and I taking off before it) then I would have being launched to a very bloody end.

Camilla Stoddart. Cardrona, NZ. 2011. Quintessential Kiwi shot here. I love the dogs in this shot. They look like they want to show me how to really do it.

Camilla Stoddart. Wanaka, NZ. 2011. This reminds me of powder turns.

Greig Howell. Gorge Road, NZ. 2010. This place is so dialed and was my home for the first few years that I lived in Queenstown. It is an honour to have so many memories from that place.

Greig Howell. Frew Farm Jam, NZ. 2010. So close to Karl Benseman that we could buzz tires.

Ian Hylands. Blue Mountains, Jamaica. 2011. Yes, I did ride this one out. The dirt here is perfect and it allowed for fun times on the side knobs.

Mason Mashon. Whistler, BC. 2010. Dirt Merchant had just had a buff job so the guides and instructors were invited to destroy it for the camera of hair model Mason Mashon. I just like this shot because the body english is perfect, if I don’t mind saying myself. Angulated, twisted hips, shoulders strong, eyes.

Nicolas Teichrob. Cumberland, BC. 2011. This might be dawn the next day. The trails are so much fun in Cumberland and I could ride them over and over again. I didn’t mind riding this corner-roller a few times for Nic but, as usual, he got the best shot first time.

Nicolas Teichrob. Cumberland, BC. 2011. Sunset session at the pumptrack yielded this keeper. I love the composition and the look into the machine that allows a rider to blast skid scrubs.

Tim Pierce. Cromwell, NZ. 2009. This photo was one of the first I ever had printed in a magazine so means a huge amount to me. Tim Pierce is a genius behind the camera and can rip on a bike too. When this was taken he was still really young and blowing minds around NZ for his photography and video skills. He has a remarkable eye and a gift for perfection. He has gone on to make a big name for himself around the world but I think he still has legs to really go far. Watch his space.

One thought on “Marmite Shots”