We were sent this excerpt of a Kennet Brothers tale by Caleb Smith (Spoke Magazine Founder and Publisher). Read this and tell me it doesn’t tickle your fancy. New Zealand bound perhaps?

ON A MISSION IN MOKIHINUI

REVIVING GHOSTS OF A TRAIL PAST

Abandoned trails make for the best mountain biking. The older, the better. Anything built more than a century ago is guaranteed to scrub up into old-school riding perfection. Cases in point? The Rameka Track (circa 1857), the Dun Mountain Trail (circa 1862) and the Old Ghost Road (circa 1880s), to name a few. The Rameka and Dun have been upgraded in recent years and now attract thousands of treadheads annually. The Old Ghost Road has the potential to eclipse them both and become New Zealand’s ultimate hardcore wilderness ride, possibly even surpassing the legendary Heaphy Track.
Mountain bike trail builders have the Old Ghost Road in a pincer move. From the north and the south ends of the proposed 85km trail, the battle to create New Zealand’s greatest multi-day ride has just jumped from granny gear into the middle ring. But make no mistake, it’s still an epic in progress, as the Old Ghost Road was never finished. In search of gold and a passable trading route, the old timers attacked the rugged Lyell Range of the West Coast from two flanks, but left the middle untouched. Was it simply too tough? Those men built with picks and shovels, and blasted the steepest granite slopes with dynamite. They constructed, rock by rock, intricate retaining walls that remain firm today, disguised by moss and lichen. But the West Coast terrain and weather can be a formidable foe for even the hardiest trail builders.
The southern end of the Lyell Track was constructed in the 1880s with the aim of transporting miners to gold prospects up the Lyell River. After clearing a century of tree falls, and cutting new track across old slips, this section was reopened in 2011, presenting 36km return of sweet riding along a benched track, sprinkled with a carpet of native beech leaves. This section of track climbs gradually away from the Lyell ghost town to a saddle where a hut was recently built for trail users (but will serve as the base for trail crews until near the end of 2012). That’s where the original Lyell Track stopped, but it’s not where this story ends. Having completed one building, the hut construction team were helicoptered north over the Lyell Tops and quickly knocked up a truly spectacular hut at Ghost Lake. Between the two huts, three crews of trail builders are now racing against the oncoming winter storms to create a link that will be the most exposed and wild section of mountain bike track in the country. The route will climb well over 1000 metres and take in views of two national parks; certainly not for the faint-hearted.
Meanwhile, at the northern end of the Old Ghost Road lies another classic pioneers’ route, the Mokihinui Track. Also built in the 1880s as a trading route through to Karamea, the track was partially destroyed by the massive 1929 Murchison earthquake. A series of formidable landslides left parts impassable, yet more than eighty percent of the track was still there in perfect condition, waiting to be uncovered. This was achieved in part in the 1970s when hunting was at its peak and access tracks were popping up along most West Coast valleys, but the route was still very rough and soon began to deteriorate again. Cue the mountain bikers.
In January this year, the first multi-regional work party was organised to restore the magic of the Mokihinui. Crews were mobilised from Christchurch by Dave Mitchell, from Wellington by the Kennett Brothers, Nelson by Murray Drake, Motueka by Guy Trainor, and Westport northwards by Phil Rossiter. Over forty people descended on the Mokihinui with a common goal in mind: to open up as much rideable track as possible, as quickly as possible.
The Christchurch crew was first on the scene, and proved to be the most disciplined. Unlike those from Wellington and Nelson, they left all their toys at home, and only brought tools. Working with the Coasters from early on Saturday morning, they must have opened up three kilometres of track on their own! There were obstacles of all sizes and shapes; mostly rocks and fallen trees. Many could be cleared by hand, but some huge old tree falls needed a dedicated assault team, armed with chainsaws, grubbers and loads of muscle, to clear a passage.
Thanks to these efforts, a forestry team and local digger have been able to forge through even further, and now, one month down the track, intermediate riders can enjoy a challenging 22km return trip alongside one of the most beautiful, untouched rivers on the coast.
Along with Charming Creek Walkway, the Denniston Plateau, and from May the Heaphy back on the books, the northern West Coast is now a world-class destination for mountain bike adventures. So here’s one suggestion: head over to the West Coast, liberating your bike and your legs along the way with a spin up the Lyell Track, then base yourself at the local village of Seddonville and warm up for the Heaphy with a couple of reccies through Charming Creek and the Mokihinui.
But get in fast. An electricity company has earmarked the Mokihinui for damming in the near future. They plan to build an 85-metre-high concrete wall, blocking the river and drowning a trail that has been 130 years in the making. So get pedalling (not paddling) and experience for yourselves this amazing area and the remarkable efforts of track builders past and present.
It’s been a long time in the making. The Kennett Brothers 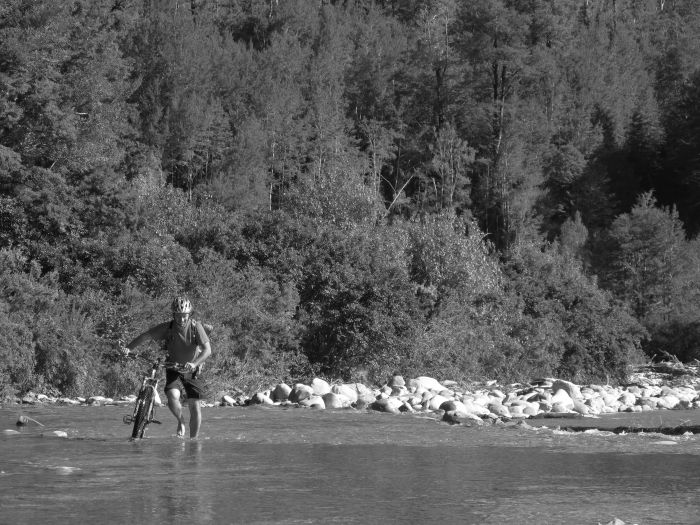