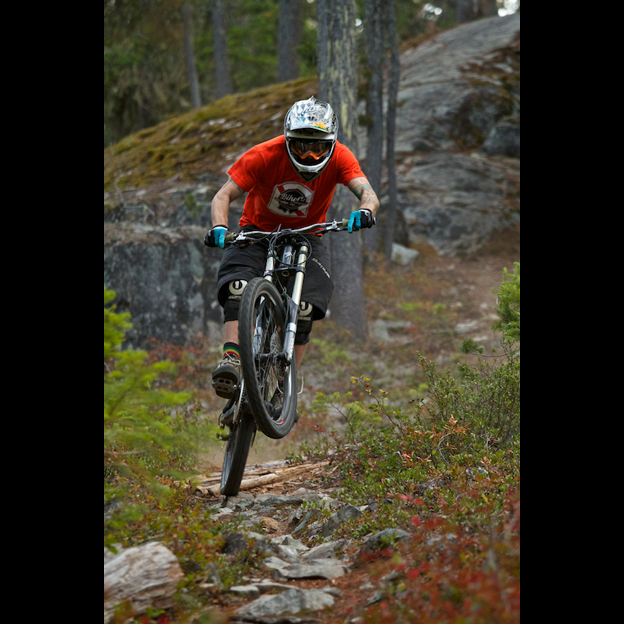 Photo: Todd Hellinga. Stole from his reports, but not stolen from Facebook. Be careful with stealing photos from Facebook. Just because someone has made them 'public' on FB doesn't mean you can go posting them yourself everywhere friends.

So my good friend the ex-president Todd Hellinga found himself with a new gig this summer. As an avid forum poster on NSMB.com (something which I turn a blind eye to because he uses this power for good not bad, and he is a legend of a bloke) Cam McRae (NSMB Master of Ceremonies) asked Todd to make a weekly report on the goings on in Whistler throughout the summer called the WEEKLY WHISTLER REPORT. I don’t think Cam expected anyone to but as much heart into this weekly task as Todd does. Every week the report is packed with useful reporting on events, happenings, posting what is happening soon, and even flavours it with some good salt and spice. The best thing is Todd doesn’t just concentrate on the goings on of the Bike Park, but covers the very varied styles of riding throughout the Valley – XC, DH, DJ, BCXC.

Another awesome thing is because I’m good mates with him we ride and shoot together alot so plenty of shots go up in the reports. This week the above shot of me riding XC on the Carboner graces the pages.

On a slightly related note (goings on in Whistler) last night the last Loonie race of the summer happened. Now when I started riding Loonies I couldn’t believe how much of mutant the top ten guys were. I didn’t really think I could break into the rarified air of their level but at the end of last year I started to break into the top ten. Then last week, after missing a lot of the Loonies due to other assignments (like shooting photos with Todd and other photographers most thursday evenings), I managed a fourth place. I was pretty made up. Then last night I found myself battling for an even higher place. I came second which was pretty freakin sicko bro. The Loonies aren’t really about who wins and they are more about the good times hanging out afterwards, but it is nice to have a friendly battle each week and try to push your own personal time. However, now I may find myself chasing that euphoric first place, which is going to ruin me and Loonies because if i’m not careful I might end up sounding like THIS.