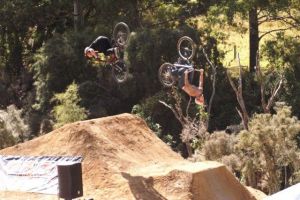 Karl Bensemann just opened up Private Distro which imports Blk Mrkt into Australia now. Karl started this because no one else was bringing them in and he loves riding his MOB. Karl is a working mans hero. Welds all day, digs in the evening, then digs and roasts all weekend. He is also a very nice and humorous human being. This photo is of Karl leading me through a flip train at the ’10 Frew Farm Jam. Bloody hell we were close. Photo by the secret assassin, Greig Howell.