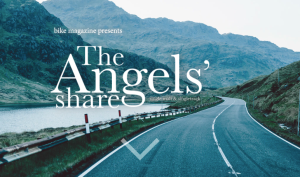 The Angels’ Share was an editorial assignment that Dan Barham and I worked on together for Bike Magazine. Originally, it was meant to be just a travel story that featured in the print version of Bike Magazine, but after returning from the trip with a huge amount of content (both words, photos and video) we decided to create an on-line, interactive version of the story.

The experiment can be found HERE. Click the link to be taken into the world of single malt and singletrack.

Traveling to a foreign land gives you a glimpse of its character. That’s a given. There’s a world of distinction, however, between being a tourist and being a traveler. The tourist experience is superficial. You poke around the edges of the place. Visit the gift shop. Bring home a T-shirt. The traveler develops a much deeper connection with his new surroundings. The traveler is more invested, stays longer, chooses his own destinations, make his own plans, absorbs something of the place. The traveler, ultimately, is changed by his travels.

To mountain bike through some place new puts you somewhere in the middle between tourist and traveler. On one hand, you have an intimate engagement with the land because you feel, taste, smell, hear and breathe its idiosyncratic qualities as you move through the terrain. But there’s no denying this fact: Your voyage by bike is still a flicker book of fleeting imagery. We riders don’t exactly linger. Well, most of the time we don’t…

In June of this year, Dan Barham, Callum Jelley, Richard Cunynghame and I visited Scotland. We wanted to explore Scotland’s wildly varied singletrack experience. But we didn’t just go for the singletrack, we went to Scotland hoping to understand something more about the land and the people, and we’d use single malt whisky as our looking glass.

There’s something you must understand: Scotch is woven into everything in Scotland. From an economic standpoint this is obvious. Whisky distilling is the great survivor of the traditional Scottish industries, as evidenced by the 1.19 billion bottles of Scotch whisky that were sold around the world in 2012 at a staggering value of £4.27 billion.

To put a finer point on it, Scotch constitutes roughly a quarter of Scotland’s exports. The drink, however, isn’t just a means of commerce for the people of Scotland; it’s a connection with their land, ancestors and national identity. Poets, musicians, painters and writers have long had a relationship with the single malt, not just as a liquid muse to fuel the artistic process, but as a narrative theme alone.

You can’t visit Scotland and fail to acknowledge the achievements and depth of Scotch. We had no intention of making that mistake.

It all started in Campbeltown, and little did we know how good the very first distillery was…

Actually, it all started in Glasgow airport where we picked up the ‘Road Snail’ or ‘masturbatorium’, as Dan preferred to call it.

This is Glasgow. Picking up Cunny and Callum.

This is Scotland. Or at least the vision most firmly held by some.

Every road, as beautiful as every piece of singletrack or single malt.

In the middle of Campbeltown. I think you could get away with quite a lot in this town.

The barley being dried before malting.

The source of everything Scotchie.

This machine was so good and lasted so long that it put Porteus out of business. This was before in-built obsolescence became a thing.

It was great to be back in Britain having regular tea breaks and bacon sarnies.

First night of the trip and the sky was wild. Northern Lights? Celestial sign? Or too much to drink?

Waking up in Sligachan, or was it 10pm at night? The days are long in midsummer.

A stonewall hundreds of years old and a plastic bicycle. The locals didn’t know what to think.

Any Scotch you can think of, it was there.

Climbing up to Coire Laggan from Glenbrittle

Canna, Eigg, and Rum adrift in the sky.

The first sign you see after disembarking from the ferry.

Everything is pretty and pristine.

Very early and this began a very special day.

Laying claim to a piece of Islay peat.

Second stop of the day. Already we were very smiley.

Go on then. Lagavulin in leather couches served by beautiful young ladies. Yes, this island exists.

About the only singletrack we found all day.

A long road fueled by Scotch.

Glentress Trail Centre. Amercian’s think they are the centre of the universe for mountain bikes, they are very wrong to think that.

Fun for all the family.

Accessible for all, the Scottish trail centres are a leading example of modern mountain biking.

From that to that.

Think of all the garden furniture you could make…

We visited dozens of distilleries in the name of research. I loved them all.